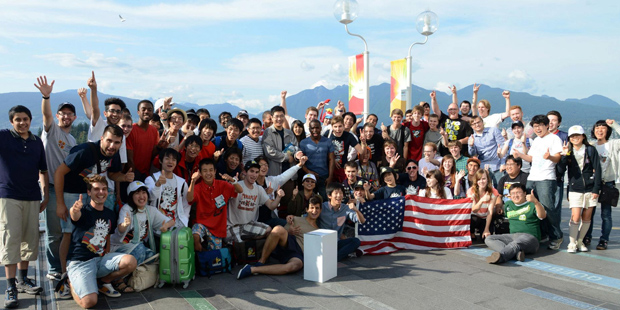 Nugget Bridge aims to grow and strengthen the competitive Pokémon community by providing a place for players to learn, share, compete, and socialize.  We are your #1 source for information and media on the Video Game Championships!

The world of competitive Pokémon used to be a different place.

For the first three generations, there was no way to battle or trade over the Internet using the real games. Instead, online communities (such as Azure Heights, GameFAQs, IGN, Pojo, and RPGamer) formed around fan-made battle simulators. These early communities held their own tournaments and formed their own rules, all of which became part of a culture where players strived to be the very best.

In 2004, a group from these communities came together to form Smogon University, a website dedicated to this competitive Pokémon culture. Some of Nugget Bridge’s founders were also in this original group.

In 2007, the landscape of competitive Pokémon was changed forever. The introduction of online play with Pokémon Diamond and Pearl created an explosion of popularity in this once niche community in a way that was never expected. Unfortunately, old habits die hard and Smogon continued to focus on the battle simulators that had once been created out of necessity.

In the meantime, The Pokémon Company International and Nintendo did see the potential to grow a community based on competitive play. In 2008, they added the video game to their Organized Play program and the Video Game Championships (VGC) were born. But again, the established online community ignored it because it was not what they were used to. Despite this, much like play over the Nintendo WiFi Connection, the Video Game Championships would continue to grow.

As the games themselves started being designed for the format of the Video Game Championships, the players who were unable or unwilling to adapt started to create more and more custom rules to play what they were used to.

By 2011, the world of competitive Pokémon was again a fragmented place. Smogon and Pokémon Online were spending their time painstakingly tinkering with rules and philosophical battles. New communities like WishMKR were popping up. All the while, the growing playerbase for the Video Game Championships was either trying to make do on Smogon or attempting to create something new on SkarmBliss. We decided that at least some of these fragments were unnecessary and it was then that Nugget Bridge was conceptualized.

In 2002, Game Freak completely rebooted the battle and stats system with Pokémon Ruby and Sapphire to increase the level of strategy and customization in what would turn out to be the final generation of offline Pokémon titles. A decade later in 2012, online tournaments over the Nintendo WiFi Connection saw over 25,000 entrants at a time.

In 2006, The Pokémon Company International held the Journey Across America tournament series in the United States celebrating the franchise’s 10th year anniversary. 2011 marked its 15th anniversary and the beginning of a tournament circuit that would span 25 events across nine countries in three continents.

The world of competitive Pokémon used to be a different place. Join us at Nugget Bridge and experience its evolution with us.