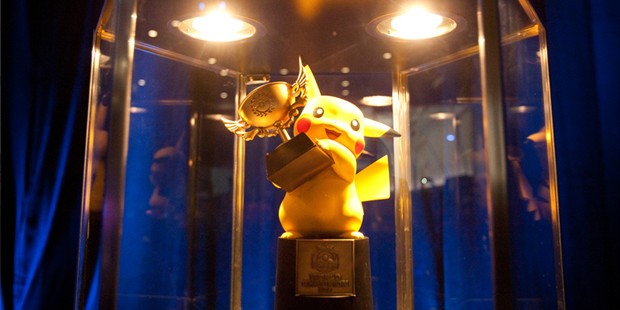 You’ve probably seen this acronym “VGC” all over the place since you arrived here at Nugget Bridge. What does it stand for? Even this page has it in its title! Good question. VGC stands for Video Game Championships and it’s the name of The Pokémon Company International and Nintendo’s official competitive Pokémon tournament circuit. It’s Pokémon’s version of tournaments like the League of Legends Championship Series or the Global Starcraft League. VGC is also often used to colloquially refer to the ruleset used for the tournaments, which can change from season. Formally, this ruleset is known as Standard.

The Pokémon World Championship is the largest Pokémon event of the year. The best players from across the world gather for an unbelievable showcase of skill. The event also features various side events, exclusive merchandise, and autograph signings from the creators of the franchise. Before the main event, players are given one last chance to qualify by taking part in the Last Chance Qualifier tournament. Qualifying for the World Championships differs from region to region.

National Championships are held in various countries in Western Europe in late spring. Players earn Championship Points depending on their placement at these events and the Top 32 players in Europe and Africa receive invitations to compete in the World Championships. Note: European qualification method has not been confirmed at this time. Please check regularly for updates!

Requirements for Japan have differed from year-to-year. The last two years had players play in a Japan-only online ladder tournament to qualify for their National Championships. The finalists of each age division were sent to the World Championships. We will have more information as Japan’s qualification method is announced.

Last year, South Korean players competed in online tournaments to qualify for the Korea National Championships. The winner of each age division was sent to the World Championships. We will have more information as Korea’s qualification method is announced.

In its first and only year so far, Australia had regional tournaments which gave trips to their open National Championships at PAX Australia in Melbourne. The finalists of each age division were sent to the World Championships. We will have more information as Australia’s qualification method is announced.

Where is the Closest Event?

You can find your closest event using the Pokémon Event Locator or our handy Events Listing! Also be sure to check our Premiere Tournaments and Local Tournaments boards.