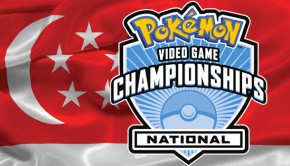 Southeast Asia will finally have its first ever Pokémon Video Game National Championships, held right in the heart of Singapore.