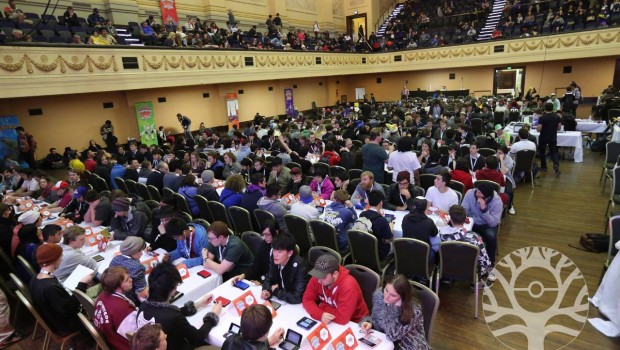 The most important Pokémon event in Australia is coming up and many players will be relying on their placing at Nationals for their chance to compete in Boston at the Pokémon World Championships. Australia’s circuit introduced Championship Points this year and had a very late start to the season with five Australian Regionals, a single New Zealand Regionals, and a handful of Premier Challenges being included into the circuit. Many Australians who cannot afford to travel to Singapore Nationals will pin their hopes and dreams on a single placing. My name is Bailey, although I’m more commonly referred to as Bargens, and I’ll be giving an in-depth insight into Australian Nationals which will be held on June 7th-8th.

While Championship Points for most players may not be too high I do think it’s good to see where players are sitting going into Nationals. Those who are currently sitting in world invite positions are below, whilst those in bold are currently sitting in paid invite positions. All of the non-Australian players in South East Asia have not got fully updated Championship Points, so I will go by the results listed on the official website. Thanks to “Boomguy”  for the help in tallying the list. List calculated as of 30th May 2015.

With the current CP count I expect the top 18 to change drastically and for over half of the players listed here to be overtaken. In saying that, the 8 non-Australian players will certainly be removed from the standings until Singapore Nationals takes place on the 27th to 28th of June.

Alongside the above information there are a few points of note. Event times should be updated soon so stay tuned for those. Registration times are as yet to be posted also so to be on the safe side all VGC competitors should aim to register on Saturday as per Nintendo’s schedule.

Australian Nationals will feature a large number of established players as well as a large number of less seasoned competitors, which will most likely rival Europe and the US  in numbers. With Nationals being arguably the only way to get a worlds invite it can be assumed that interstate travelers will increase, and a top 8 placing will most likely guarantee a worlds invite.

Winner of Nationals and Worlds Top Cut player Dayne O’Meara (Prof. Teak) has confirmed he will be traveling to the event, and after a decent placing at Sydney Regionals has proven he is still most definitely in form. The runner up Michael “Rotom-Fan” Wawrzycki has also had a decent placing, this time at Melbourne Regionals, and is also looking to repeat his placing. In top 16 we have both Layne Hall (Lejn) and Mitch Kendrick (Mitch) who have placed within the top cut of Melbourne and Brisbane Regionals respectively. Layne has also had some respectable results this season, most notably a top 16 in the Nugget Bridge Major, and with such consistent results it’s very plausible that Layne will top cut again this year. Unfortunately Layne will be unable to play day 2 top cut, but will most definitely be there on the Sunday. Mitch Kendrick (Mitch) has also repeated the consistent results of last year, with a second place in Brisbane Regionals as well as multiple top 16 finishes across the board, and will be going into Nationals with a respectable 180 Championship Points. In seniors top cut of last year we have worlds competitor Callum Witt (CruiseVGC) who, after a top 4 at Melbourne Regionals, has shown he has what it takes to play with the big boys. Callum has been fairly absent online but has been practicing hard for Nationals and should not be taken lightly because of his age.

On the Championship Points Board

Alongside the top cut from last year there are a few players with very notable achievements who should not be taken lightly based on their results last year. Chris Giagozoglou (The Batman) is currently first on the board with a crazy 420 Championship Points, as well as two Regional wins. With such consistent results it would be an understatement to say that Chris will be a threat this Nationals. Mustafaa Olomi (mustytkd) is another player who already has a Regionals win under his belt, as well as a top 16 in Brisbane Regionals. Mustafaa has a large Battle Spot presence and has been placing within the top ten of Australia since the beginning of the season. Nihal Noor (UchihaX96) is a player who up until Regionals was more or less off of the radar. Achieving first and top 16 in arguably the two hardest Australian Regionals is no small feat, and after defeating me in the top 4 of Adelaide Regionals, is a player I would prefer to avoid throughout Nationals. The undefeated Sydney Regional Champion Daniel Pol (Chiron) really picked up right before Regionals and created what is now known as “Daniel Pol The Team.” This is the first National Championship Daniel has attended and although remaining relatively quiet, has shown his strength as a player. The last Australian in the top 18 in Championship Points traveling to Nationals is Saamid Zikria (Yourf). Saamid had sub-par results at Sydney and Melbourne Regionals, unable to repeat his top cut at last years Nationals, but eventually hit big in Adelaide placing second. Saamid is also the first and only Australian to win a Nugget Bridge Live, which is definitely an achievement he can gloat about.

Other Players to Look Out For

Jackson Lakey (FamousDeaf) is the first player who comes to mind as a player to look out for. After taking me down in top 16 of Melbourne Regionals Jackson managed to make top four, where he was beaten by eventual second place Nathan Farrugia. Jackson is one of the more consistent Australian players with a large Battle Spot presence and has been top cutting smaller tournaments since before I even knew what VGC was. It’s fairly safe to say that Jackson will be achieving top cut at Nationals, or if not, will go down fighting. The one and only Phil Nguyen (Boomguy) will also be attending Nationals. Last season Phil was the only Australian competing in the Nugget Bridge Invitational and had shown he had what it takes to play at a high level. This year however, after achieving what is known as the “Double Bubble” at two Regionals, Phil is seeking redemption in the form of a World Championships invite at Nationals. Phil is not the only one seeking redemption however, as Sam Pandelis (ZeldaVGC) will be looking to reclaim Melbourne as his own, with this year being the first year that he was unable to win Melbourne Regionals. Sam is a player known to play consistently and was able to top cut every tournament he played in last season, and it’s very plausible that this may be repeated at Nationals this year. Sam also managed to top cut the Nugget Bridge Major alongside other Australians Martin Larumbe (XxXBase420), Ty Power (Sarkastik), Jerikho Bulanadi (Echomoner) and Matthew Roe (RoeySK). All of these players have had strong showings recently, most achieving top cut at Premier Challenges or in Matthew’s case, a top 4 at Adelaide Regionals. Another player who’s had quite an impact in the community this year is Luke Curtale (Dawg). Luke has been the go-to guy for team building in Australia and aided in building Daniel Pol’s winning Regionals team, as well as having input into both of my Regional top cut teams. Whilst not having great results at live events in Australia, Luke has managed to place second in Australia in the International Challenge, with only the other South Australian Matthew Bockman (Zyihk) besting him. Matthew managed to not drop more than 2 games per Regionals, which going into Nationals is a good sign, especially if we follow in the footsteps of UK and US having all of those with two losses or less top cutting.

My Personal Pick to Win

It’s definitely not an easy task choosing a winner in a tournament which is expected to have over 400 players, but going solely on consistency I would have to say either Jackson Lakey (FamousDeaf) or Sam Pandelis (ZeldaVGC). Both players have had great results this season and are, in my personal opinion, two of the best players in Australia. I think it’s fairly safe to say that both will be placing well and they’re definitely players I would like to see representing Australia at the World Championships. However, any of the names listed can take Nationals and I’m excited to see Australia lift it’s game this year to such a high level.

Thank you for reading through the preview of Australian Nationals! If you live in Melbourne and have time to come down it’s definitely worthwhile. There’s gonna be tons of people attending so if you have the time to come down you really should, competitive or not we all love Pokemon and that’s why we’re attending these events.